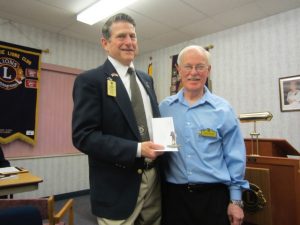 Since the Fund’s inception in 2006, 262 people with hearing loss have been given the gift of hearing through the donations of the 42 District 20-N Lions Clubs totaling over $64,000.  The Kenmore Lions Club of which Dr. Ann Stadelmaier was a member has provided 21 hearing aids, the most in the District.

Tom played an integral role in developing and growing the AES Fund, which was established in memory of his fellow Lion and past Executive Director of HES, Dr. Ann Stadelmaier, who passed away after a long battle with cancer in 2006. This program provides hearing assistance to those with hearing loss who cannot otherwise afford these services throughout the Erie, Niagara, Chautauqua and Cattaraugus counties.

“Ann demonstrated the Lions’ Motto, ‘We Serve’”, from the day she became a Lion until her health deteriorated to the point where she was no longer physically able to do so,” Tom recalls. “Shortly before her passing, her colleagues at HES asked what they could do to help. Ann humbly asked them to carry out her efforts and continue fundraising to provide patients in need with the gift of hearing.”

“The success of the AES Fund can largely be attributed to Tom’s commitment to the cause,” says Dr. Orsene. “He helped garner the support of the Lions Clubs, which make up a large part of the Fund’s donations. I think Dr. Stadelmaier would be very pleased with all he has done.”

“Helping people of all ages improve their quality of life through better hearing is incredibly rewarding,” says Tom. “Hearing the happiness in the voices of these individuals when their application has been approved is absolutely incredible.”

Tom has been a Kenmore Lion since 1987, and has served as President, Secretary, Treasurer, Chaplain, Membership Chair and “Lion’s Roar” Editor. He has also served in several positions for District 20-N, most notably as District Governor for 2003 – 2004.  During his time as a Lion, Tom also served as Chair of the Lions Blind & Charity Fund for 18 years and the Buffalo Eye Bank Foundation for five years. Tom has earned recognition for his philanthropic service, receiving the prestigious Progressive Melvin Jones Fellowship Award, four International President’s Certificates of Appreciation, International President’s Award and the Lions Blind & Charity Fund: “Knights of the Blind” Award – among others.

Hearing Evaluation Services of Buffalo is one of the largest freestanding, non-profit audiology practices in the country, with locations in Amherst, Williamsville, Orchard Park and Tonawanda. HES offers hearing and balance services, treatments, and solutions for those suffering from hearing loss, balance disorders, and tinnitus. Since its inception in 1981, HES has upheld high standards of ethics and aims to not only treat, but to educate individuals about the negative impact of untreated hearing loss including cognitive decline, social isolation and depression.  To learn more about the work of Tom, HES, and the AES Fund, visit www.HESofBuffalo.org.