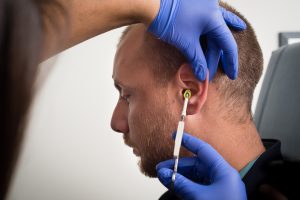 Earwax, also called cerumen, is a waxy substance produced by glands in your ear canal. It looks different in different people, typically ranging in color from light orange to dark brown. Some people secrete large amounts of earwax, some hardly produce earwax at all. Although it may seem counterintuitive, earwax plays a very important role in keeping your ears clean.

Why does the body produce earwax?

The ear produces earwax as a method of self-cleaning; it protects the ear from dust, dirt, and other debris. Debris that travels into the ear is enveloped in earwax and is gradually carried out of the ear through chewing, talking, and other jaw motion.

Why do I build up more earwax now that I wear hearing aids?

Although a hearing aid helps you hear better, the ear considers your hearing aid to be a “foreign object”. The ear attempts to move the hearing aid out of the ear by building up earwax, just as it does with dirt and debris. Hearing aid users often have more issues with wax buildup, or cerumen impaction, because the natural motion of the earwax is disrupted because it is blocked by the hearing aid.

How do I know if I have a cerumen impaction?

Common symptoms of cerumen impaction are:

• Fullness in the ear, earache, or a sensation that the ear is plugged

• Ringing, buzzing, or crackling sounds in the ear 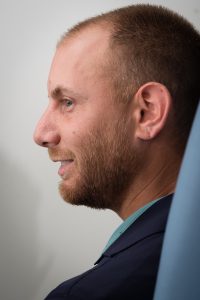 Nothing smaller than your elbow should go in your ears! Cotton swabs (or Q-tips) were invented as a tool to clean hard-to-reach places, like the ear canal. However, we do not recommend using cotton swabs in your ear canal as they can push wax deeper into your ear canal and cause a cerumen impaction or perforation of your eardrum!

Can my hearing aid be affected by earwax?

If you have any questions about how to manage earwax, would like tips on how to clean your hearing aids, or would like to schedule an appointment for cerumen removal, call our office